Let’s face it: there are a lot of myths surrounding adoption. Where the real need is in adoption, the costs of adoption,?what open adoption really looks like, what expectant parents are looking for in an adoptive family…the list goes on.
But truly, some of the biggest myths about adoption is the birth family. There are a lot of assumptions made about who they are, why they decide to make an adoption plan, and how they feel about their child. I’ve never made an adoption plan, but I’ve worked with many amazing women and men who have. Here’s a few things I’ve learned about these courageous parents…

There is no ‘typical’ birth parent.
I’ve worked with birth parents ranging in age from 15 to 45 years old. For some birth mothers, it’s their first baby. For some it’s their seventh. For some it’s the first baby they’ve chosen life for after having an abortion. Couples who are married. High school students and graduate students. Artists, musicians, administrative assistants and managers. Every birth parent has a unique story and a unique reason for making an adoption plan.
Birth parents don’t ‘give up’ their children.
I’ve never met a birth parent who wants to ‘give up’ their baby. The act of making an adoption plan is selfless, courageous, and agonizing. Adoption is less about giving up and more about giving: giving life, giving a future, and giving tremendous love. Instead of being unwanted, birth parents want to give their child a life, even if there’s unanswered questions and unknowns ahead. It’s been said that adoption is not the abandonment of a baby, but the abandonment of self for a baby’s sake.
Birth parents love their children.
Adoption is made up of the kind of sacrificial love when a parent puts their child’s needs above their own. Their child is desperately wanted and deeply and fully loved. It’s this kind of love that drives their decision to choose adoption; believing it truly is what’s best for their child.
Birth fathers can be involved.
There’s an assumption that birth father’s are out of the picture and not a part of adoptions. Although this can be the case (and even some of the reason a mother chooses an adoption plan), there are actually many times birth fathers are involved. Of course every birth father has rights as a parent and many choose to actively engage in the process; supporting the birth mother during the pregnancy and birth, helping to choose an adoptive family, and sharing an ongoing relationship with their child.
Openness feels scary to them, too.
More often than not, birth parents shy away from openness not because they don’t want an ongoing relationship with their child, but because they don’t want to infringe on the new family that has formed. They have planned and sacrificed for their child to be placed in an adoptive family and don’t want anything interfering, including themselves.
?
Birth parents don’t move on and forget.
Every birth mother I know has told me they think about their child daily, even years after the adoption. The same fierce love that drove them to choose adoption continues throughout their lives. It’s a common refrain to constantly wonder how their child is doing, how they are growing, and if their child knows how deeply wanted and important they were from the beginning.
There are a lot of myths out there about “the kind of people” who make adoption plans. As I’ve walked with them, held their hands during labor and delivery, and watched them place their babies in another’s arms, I know the truth about these “kind of people.” They are some of the bravest, strongest, and selfless men and women I know. They are incredible mothers and courageous fathers. They know the kind of love that places anothers’ needs before their own.
So instead of a birth parent having some sort of stigma, or narrowly putting them into a box, these are the men and women that need to be celebrated, held in high esteem, and cherished. Let’s start a movement acknowledging and honoring the tremendous worth and value of birth mothers and birth fathers.
For more on birth parents:
My Heroes
Choosing Life
For Birth Parents: A Guide For Your Adoption
Dear Adoptive Mom (What Birth Parents Wish You Knew)
In Their Own Words: Adoptive Mamas Talk Candidly About Birth Parents 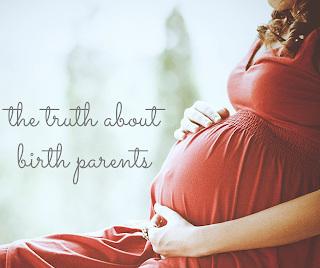