Those two words are enough to strike the fear of God in people: “open adoption.”No matter who you are, I’ve found that nearly everyone immediately goes to the most recent Lifetime movie of the “big bad birth mother” who shows up on the doorstep of the adoptive family with a golf club demanding her baby back. Or the crazed tabloid story of the father that took the baby to the forests of Digibuti and never returned.

I’ve had this discussion with dozens and dozens of adoptive parents. And other mothers. And friends. And strangers who find out what I do. Because everyone wants to know what it really looks like and if it reallyworks.

So let me just talk to you about open adoption like I would with one of my adoptive families. We’re in your living room and you’ve brewed me some Starbucks to win me over. Done.
I would say this: “Get over it.”?(OK – I don’t really say that.) But this is something like what we would chat about…

Years ago almost all adoptions were closed. A young woman got “pregnant out of wedlock” and went to “visit Aunt Jean in Oklahoma” for several months. She would deliver, most likely not be given a chance to even meet her baby, and return never to speak of the life-changing event again. Then a sweet young couple dealing silently with infertility would be notified that a baby who matched their skin tone and hair and eye color was ready and waiting for them. Only close friends and family knew the baby was adopted and they would never speak of it again either. Until that sweet baby got to be an adult and they discovered the truth: “Happy 18th Birthday! Here’s your original birth certificate – you were adopted [insert super awkward pause here]…”

OK – the story didn’t always work out that way. But more often than not, this was a typical plot line. And you’ve heard it because many of these people ended up on Oprah or Regis and Kelly with tearful and dramatic reunions.

Today we know better. We know that closed adoption is usually not the best for anyone in the adoption triad (birth parents, adoptive parents, and adoptee). For the birth parents, openness offers incredible closure and solidifies their choice for adoption. For the adoptive family, they have important information (social and medical) that make up a huge piece of their child. And for the adoptee, they’ve heard first-hand from the source the reasons their birth parents made an adoption plan. The child also has more of a sense of identity (I got my brown eyes from my birth mom and my love for music from my birth father’s dad) which is invaluable for their sense of worth. 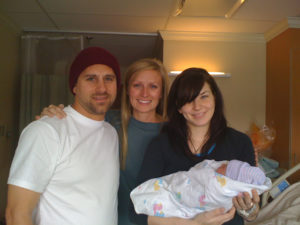 Many people think openness will lead to second thoughts, confusion, and Lifetime movie drama on their own doorstep. Instead, it leads to honesty, insight, closure, and genuine relationships.

Openness is a?continuum. For as many different families who have adopted there are just as many?variations to openness.

Here’s the concerns and questions I’m asked almost every time I get into a conversation about open adoption:

We don’t want to confuse our child. We want them to know we are their parents.

Usually we’re the ones that make things confusing. If the birth and adoptive families are clear about their roles and aren’t rivals, the child won’t be confused. Just like some of us know and have unique relationships with two sets of grandparents, it doesn’t mean we don’t understand the important and often different relationship we have with each of them. Ignoring or undermining the significance of a child’s birth parents can undermine the child’s identity.

We don’t want the birth parents to change their mind. What if they see us and have second thoughts?

Open adoption?actually’solidifies a birth parent’s choice for adoption.Rather than wondering “did I make the right choice? Are the adoptive parents really who they said they were? Do they love him as much as I do?” – the birth parents actually get to SEE their child being loved?like crazy and know they made the right decision.

What if the birth parents are intrusive or don’t approve of our parenting style?

The birth parents have chosen the adoptive family to raise their child. Usually, they have received excellent counsel and fully understand the adoption process.Birth parents recognize that they are not in a season to parent and are giving up the ability to parent their child in the traditional sense of the word. After consent is signed and the adoption is finalized, it’s understood that the adoptive family is the legal parents in every sense of the word.

I’ve seen families walk this out literally hundreds of ways. I know a family who has set up a private blog and they update their birth parents (and the birth grandmas!) with picture and video updates. Another family sends pictures monthly to add to a scrapbook they made for the birth mom. Many families text updates and pictures. Most families send picture and letters through email. Some celebrate holidays together. I know one couple even who babysit for their now 3 year old daughter!

Here’s the crazy thing: these same fears that adoptive families have are the?exact same fears?birth families have. I’ve sat in numerous coffee shops with mamas saying they want to be sure not to overstep boundaries and want their child to know they’ve chosen an adoptive family to be parents. Big bad birth mama complex?Right out the window.

You see, these are women who have made the ultimate sacrifice. They are the antithesis of selfish women who only want what’s best for themselves. In an open adoption, they have hand-picked a family to raise their sweet baby. Birth parents aren’t baby-snatchers. Because of their immense love for their baby they have chosen adoption. Is it hard? Yes. Do they waver and second-guess? Almost always. But they are the heroes that deserve more than our questioning raised eye-brows. They have chosen LIFE when the world tells them otherwise. They deserve our awe, respect, and honor.

Below is an amazing video?of some open adoption stories fromThe Adoption Center of San Diego. I give this video to many adoptive and birth parents when discussing openness.

Really, openness happens best when it’s organic. I didn’t sit down with my best friend at a coffee shop the first time I met her and chart out our friendship: OK, I need email updates from you every three months, pictures of your family every 6, and these are my plans for celebrating your birthday… Real relationshipis a gradual and slow process. I can’t tell you how many families I’ve worked with who were scared to death at first at the thought of an open adoption, and then met the birth mama and fell in love with her. I’ve had many families who feel like they’ve also adopted the birth family and all become like extended family.

My only caution is this: it’s much easier to slowly open the door than to need to slam it shut. Openness happens in a healthier way like other relationships: gradually and slowly.

I was reading my twitter feed awhile ago and came across this:?“I woke up this morning and heard my son’s mother reading scripture to him.”?I immediately had tears in my eyes. It was Mother’s Day and one of my sweet birth mamas had?traveled?across the country (as she has several times now) to visit her son and his adoptive parents. And she was celebrating her first Mother’s Day with the mother she had chosen for her son. They are like family now. I can’t think of a more beautiful picture of open adoption.

Here’s the bottom line: is open adoption hard? YES. But what relationship that is truly valuable isn’t. My only “easy” relationships are with the barista and the grocer. Hard, messy, genuine, and worthwhile relationships usually happen in my living room.