I’m excited to introduce you to this beautiful lady with a huge heart! I met Audra three years ago to talk about life and Christian Adoption Consultants. At that time she and her husband had one little girl and were praying for God to add to their family. It was such a privilege to watch God shape their faith and lives in their first adoption story. Now, three years later, their family has:

a 7 year old
a 2 year old
a 5 month old
and God has recently stirred their hearts to adopt their daughter’s sibling due in February.

Yep. You read that right! This family has had their life radically turned upside down over the past three years. They know a thing or two about stepping out in faith to follow God’s lead, even into the hard. Enjoy Audra’s reflections this Christmas season on saying “yes” to God. 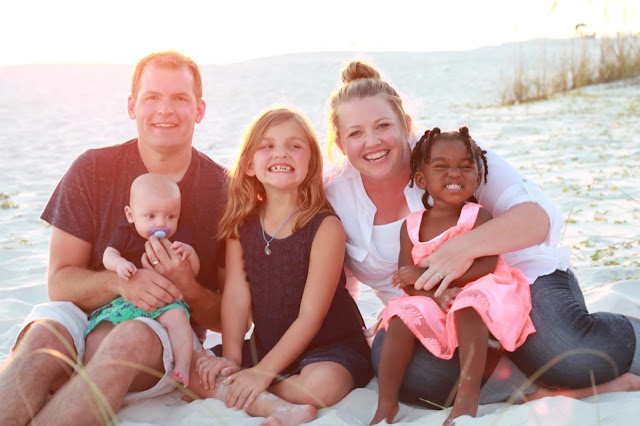 We have all heard the Christmas story, especially around this time of the year. The story of our savior born in a manger. Born on a silent night with angels singing in the background. Mary and Joseph looking peacefully down on their child who’s is destine to save the world. It’s told with such beauty and peace. What we don’t hear is the difficulty that it took for everyone to get to that moment. The moment that was prophesied over, prayed over, and hoped for for years before. A moment that seemed too big to accomplish by such ordinary people. But it was accomplished and in that moment it was perfect and sacred.

An angel came to Mary and told her she would be with child. Not just any child but the Savior, Jesus. What a task. One I can only imagine seemed unreachable and destine for failure.She was betrothed to marry Jospeh, she was young and she was a women. So many things were against her accomplishing this moment. Mary could have said no, she could have had a normal life. But she didn’t. She decided to have faith and trust that God would carry her through the tough times. Through the possibility of Joseph leaving her alone, through the many murderous attempts on her family and traveling with no place to stay when they reached their destination. Her son would be born in a stable, amongst animals and exposed.

The difficulty that it took for everyone to get to that moment could have prevented them from moving forward. But they didn’t stop and they didn’t let fear take over. They didn’t allow uncertainty to keep them their destiny. They kept saying yes to God. Yes to hard times, yes to a different and crazy path, yes to love and yes to Jesus. Why? Because their their arms were open, stretched out to the sky, confessing their faith in God and his plan for their life. Whatever that may look like.

Recently we were given the opportunity to say yes to something difficult and quite crazy in some eyes. Were were asked to adopt the biological sibling of our second daughter, who also became part of our family through adoption. We also have a 7 year old and a 5 month old.So you can see where our hesitation may come from. We had the chance to say no and we know that no one would have look down on us for that. We could have said no and had a normal and good life, a life serving our God. But we didn’t want a normal life. We wanted and desired a life that requires us to solely depend on God and not ourselves. We want to say yes in faith when He asks us to step out.

So we said YES, a shaking yes but an obedient yes. Yes to Gods plan and ours. Yes to His Glory. Yes to this child. Yes to love on our precious Birth Mom. Yes to our daughter. Yes to crazy. Yes to the unknown and yes to help.

Saying yes to God and his plan doesn’t mean life will be easy. Life in general isn’t easy, it’s very hard. Having faith doesn’t mean an absence of doubt just as courage doesn’t mean an absence of fear. Its what you do with that doubt and fear that matters. Give it God and let him lead you. The Bible is compiled of stories that we’ve all have heard growing up. These famous and heroic stories came from hard work, trials, crazy gestures, uncertainty, grief, sadness and bravery. The result-an amazing story that brings glory to the most high King. I hope and pray our story will show others that mountains can be moved with just a mustard size seed of faith. We just need to believe.

(If you’d like to support and pray for Adam and Audra in their journey or read details about their “yes,” you can do that?here?on Audra’s blog.)