Like so many hopeful adoptive parents, Justin and Nicole had plans about how they would start their family. After they were surprised with infertility, they started down the road to adoption. But that didn’t come without unexpected detours and roadblocks. Today Nicole shares their journey through adoption and to their son.
? 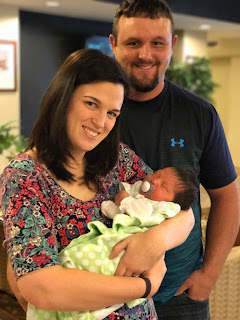 From the beginning, God had been preparing us for this journey and it is a God-written story.
?
We had struggled with infertility for about three years before we started the adoption process. When we first started our journey, I thought I had it all planned out and knew exactly how everything was going to go. However, I was so wrong. When we started our home study, initially it went well but we were soon overwhelmed with all of the paperwork that went into it. When we eventually applied to the agency we had chosen, we were denied and I was devastated.
?
After that speed bump, we discovered Susan and?Christian Adoption Services. Susan was so helpful in explaining all of the details of adoption: everything from the profile to agencies and beyond. We got everything together and were ready by the end of January 2016 to be matched with an expectant mom.We started seeing possible situations from Susan; expectant parents looking for an adoptive family for their baby.We began to put our “yes” on the table, but only heard “no” in return. We presented to so many we eventually lost count. We could always reach out to Susan who was always encouraging and said the right words to help us keep moving forward. We started getting our nursery together to give us something to keep our minds busy during this time of waiting.
Coming up on the end of 2016, we were discouraged because we hoped to have a baby in our arms before the end of the year. We started renewing our home study, and about the time we were finishing it we began to see situations from a new agency we were beginning to work with. But once again we heard a “no.”
Just two weeks later, we heard about another situation: an expectant mama who wanted to make an adoption plan for her baby. As we heard about her, this situation felt different. I knew this one was special?because it was everything we wanted. A little boy, due in March. A healthy expectant mother who wanted a closed adoption.I immediately called Justin and we both agreed that we wanted to present to this mother. After a phone call with the expectant mom, we learned later that she chose us to raise her son. Words can’t describe our feelings the moment we heard that first and final “yes”:?feelings of hope, relief, joy, happiness, and much more. It turns out all of those “no’s” we had heard previously were just “not yets.”
Just a few weeks later, almost a month to the day, we got a call that the expectant mom was having labor pains. She planned to head to the hospital in the morning, but a few hours later, Justin answered the phone and?and all I heard was “8 pounds, 8 ounces, healthy and a head full of black hair.” We were so excited; we called our families and let them know he was here, and started making travel plans as soon as we could. There were no more flights out that night so we we had to wait until morning.
When we walked into the room and metK? for the first time the next day, it was so humbling. We got to spend the day with her and we also met our son’s birth father and biological sister. The next day we said our final goodbyes, and it was one of the hardest things to watch “K” hold her son and tell him goodbye. When she handed him back to me, she told me just by seeing us for a few days she knew he was going to be well taken care of and she was confident she had made the right decision.

God wrote a perfect story, as He always does. He knew exactly what we needed and He answered our prayers for a healthy baby. We were even able to adopt debt-free with God’s incredible provision for our family.Everything fell into place in Gods timing.?He wrote this story from the beginning to the end and gave us the greatest blessing we could have ever received.

Office Hours: Monday-Friday 9-6 EST
"Do not be anxious about anything, but in everythi

"I won’t mislead you-this is a gut-wrenching sto

Nick and Kim are a CAC family who welcomed their d