Sometimes adoption is a long road. And sometimes adoption can be more of a whirlwind. That was the case with John and Lindsey who started the adoption process in July and by Christmas had their daughter in their arms. Although it was quick, it wasn’t easy. I’m thankful that Lindsey so openly shares the story of their daughter’s beginnings and their commitment to God’s plan, no matter how it was going to turn out… 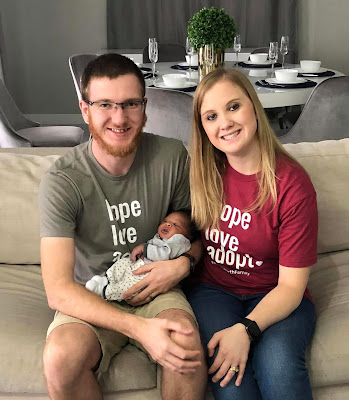 As soon and John and I were engaged, we sat down and talked about children and what we wanted our family to look like. From the beginning, God placed adoption heavy on our hearts. Two years into our marriage, we decided we wanted to start our family. After a year of trying we decided proceed with infertility treatments. Sadly, we lost a baby through miscarriage in May of 2019.

A month later, John brought up the topic of growing our family through adoption. I was still mourning the loss of our baby, but I spent the next month praying. By July, my prayer became, “God, whatever your plan is for our family, I’m ready.”

That same month, I got in touch with Susan from Christian Adoption Consultants. We started the process mid-July, completed our home study, and our profile was active at the beginning of October; it was a whirlwind. We presented to three situations but none of them panned out. Then, the week of Thanksgiving, we got the call we had been waiting for. We had been matched with an expectant mother who was due in just six weeks! We began preparing a nursery in a hurry.

The end of the expectant moms’ pregnancy was going as expected and just a few weeks later, on December 17th, we received an email update about her prenatal appointment. All was well and she was scheduled for another routine appointment the next week. But it was just two hours later that we received the phone call that mama was in labor! The rest of that day was spent packing, traveling, and praying for mama and baby.

When we arrived the next morning, we heard the update that the sweet baby had been born, but the birth mother was unsure of her adoption plans and was rethinking what was best for both of them. Our hearts sunk, but when we heard she still wanted to meet us we were eager to connect with her. We didn’t get a chance to meet the baby at that time, but we spent time with her amazing mama who was so sweet and kind.  Then, we said goodbye, not knowing how the story would end.

We checked into a hotel and wrestled with the possibility of returning home without a baby. I can remember taking a shower and crying. During my cries to God, I remember praying, “I know we are going to be okay and no matter what happens.” We clung to Psalm 3:3, “But you, O Lord, are a shield about me, my glory, and the lifter of my head.”

Our day was filled with fitful sleep and lots of tears and prayers. I finally decided to take a walk on the beach. I can remember walking and hearing the ocean waves and how soothing it was. I sat down overlooking the ocean and prayed again, asking God to be near to us, and the birth mother, and direct the outcome according to what was best. After that prayer, my heart was finally at ease, knowing God would take care of all of us, not matter what.

When I retuned to the room, we received a phone call that the birth mother had decided that adoption was the best decision for her and the baby. We returned to the hospital and had the opportunity to meet our daughter for the first time. Over the next 24 hours, we had the chance to visit more with her birth mother who kept the baby in her room until she was discharged. We’re so thankful she was able to take all the time she wanted and made a decision she can be confident in. The moment she placed her daughter into our arms, we were filled with such joy and heartbreak all at once, knowing she was saying goodbye.

Later that day we introduced our daughter, Cora Lynn, to our family and friends with overwhelming gratitude to God. I’m writing this story as I’m holding our little girl now, with that same gratitude for the journey God brought us on. God has been so good.