As an adoption consultant at Christian Adoption Consultants, my greatest honor is walking with a family as they navigate the path of adoption. What makes it even better? When I watch friends walk the journey. 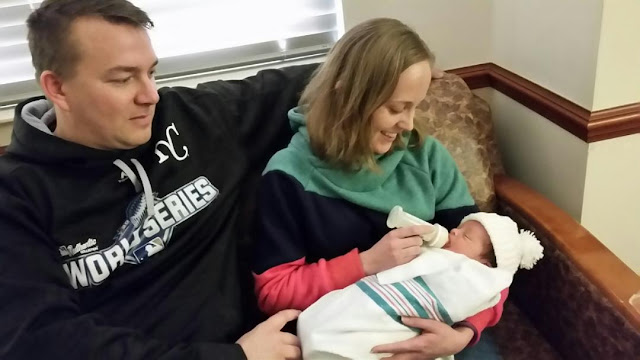 It was a few years ago when Debbie and I met at a Starbucks and she entrusted me with with what God was stirring in her heart. As a couple they had prayed and dreamed about parenting and what adoption might look like in their family. I had watched her and Joe love my kids like their own and knew they would be amazing parents one day. Anyone who knows them knows they love big, play hard, and trust Jesus. All the makings for a beautiful family.
But there were roadblocks and heartbreak along the way as they tried to build their family. Adoption was a natural step to take since adoption had already been a part of Joe’s family. They had seen firsthand the beauty of it.
They began their home study in the fall and completed it the next spring, after Debbie obtained a master’s degree in nursing. It was early fall when they were matched with an expectant mother due just before Christmas. They held loosely to their plans, but began to prepare a nursery. We were with friends and family as we gathered to celebrate their upcoming adoption with a party and prayers.
But things began to unravel in December. It was a slow fade as they watched their dreams of having a baby in their arms at Christmas dwindle into failed plans and heartbreak.
Then came the call late December 23rd. There was a baby born that day. He needed a family. Were they interested?
Christmas Eve I got the call from Debbie. “We’re on our way to meet our son!”
They didn’t wait to book a flight over the holidays. They packed up the car and raced states away to meet their son.
?
It was Christmas morning when they walked into a hospital room and met their son.
It’s an amazing gift to be able to watch a dear friend become a mother. To watch her mama heart grow as she patiently taught my kids piano. To watch his daddy arms grow strong as he threw my kids in the air. To see the sparkle in her eyes across the table at Starbucks when we talked about motherhood and adoption and the gospel.
And then watch as they become parents; raising a son who in incredibly loved. A little boy they didn’t know existed until things seemed to fall apart and God perfectly and sovereignly put them back together, exactly as He had always planned.
Congratulations Joe and Debbie. I’m gonna love watching your boy grow up. I know you’re going to be amazing parents.

"It was such an honor to walk with Kylie and Austi

Today we have a post on the blog from the perspect

Trending with the theme of "love" for this month,

This month over here at Christian Adoption Consult