Today Erin and Clayton are so kind to share their adoption story with us. I think you will see God’s gracious hand on each part of their journey, especially during an unexpected medical crisis. It’s our prayer that their story would be an encouragement to you wherever you are in your adoption process.

The idea of adoption had been on my heart for many years. I felt the call strongly in my college years, so when Clayton and I began to plan and start our life together, I made sure to communicate this desire to him, and he was supportive. We hoped we would answer this call someday, but we were not quite sure when that time would be.

As we began trying to grow our family, we faced unforeseen fertility issues, but God graciously allowed us to conceive our first son, Jude. A few years later, we felt ready to continue growing our family; however, the same fertility issues persisted, and we received a referral to a fertility specialist. We believed that this referral was the Lord telling us that now was the time to intentionally pursue adoption. So instead of making an appointment with the specialist, we met with sweet friends who were willing to share their adoption journey with us, and ended up calling CAC.

We were home study ready by Thanksgiving and began reading birth mother situations a few weeks later. We did not present our family profile to a birth mother until February. At first, we were simply overwhelmed by all of it- the finances, the heartbreaking situations, the uncertainty of it all.

After our first presentation to a mother, we finally realized that if we don’t take the leap of faith and say “yes” to a child, then we are not giving God the opportunity to show us how He will take care of the rest.

We matched with Gideon’s birth mother in March, and we were fully-funded before our deadline. It was so amazing and humbling to experience the support that we did from our family, friends, and community.

Gideon James was born in May of 2019, and we were thrilled that his birth mama allowed us to be so intricately a part of that special moment; it was a long, exhausting day that we will never forget.

Three days later, it was discovered that our sweet boy had suffered a stroke some time in utero. He was rushed to the NICU of a local children’s hospital where we stayed for the next two weeks. I don’t know that either one of us had ever experienced a test of faith like this before. I couldn’t help but think “this isn’t what I signed-up for”, “we have been so obedient and trusting, God, why are you allowing this to happen?”

For days, we honestly didn’t know what the outcome would be. Gideon was intubated, on a feeding tube, and primarily sedated for much of the time. We spoke to numerous doctors who posed a wide-range of potential outcomes. But our “mighty warrior” (as his name means) fought hard, and we experienced the power of prayer. Our community rallied with us in praying for complete healing over his little body.

Today, Gideon is 12 months old and thriving! He is meeting, and even exceeding, developmental milestones and has been dismissed from physical therapy and neurosurgery due to his amazing progress. 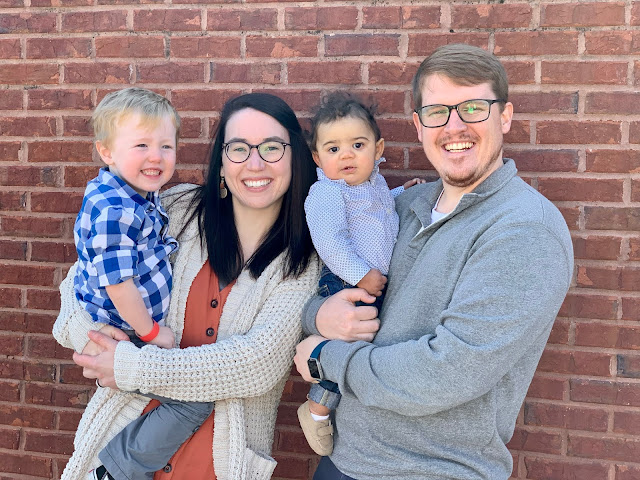 While our adoption journey did not go according to our initial plan, looking back, we are thankful. The whole process has given us the opportunity to boast about God’s sovereignty and love for His children.

Adoption is most definitely daunting, but “we love because He first loved us”, so He will make a way through whatever seems impossible.

We hope you find this quote by pastor and author,

Joel and Jamie are a CAC family who adopted their

"'What's wrong with our family?' 'Why aren't we be