Shea and I were connected through a mutual friend in October 2015.Shea just happened to be visiting a friend near where I live and we met up for breakfast to chat about adoption. The next week they submitted their application to CAC and began working on their home study.Shea shares more of their story below.
We started working with Leah in November, but God’s calling us to adoption began long before that. He gave me a heart for adoption when I was in high school and I knew it was something I would dosomeday?. It took my husband, Brett, a while longer to come around to it, but I am so thankful for our church and community being one that really fosters adoption and the Lord really used that to whisper the calling into Brett’s heart as well.
We were married in 2009 and began trying to build our family a year later in 2010. After years of trying, 3 IUI cycles and an IVF pregnancy that ended in the loss of our first babies in December 2014, we knew that that it was time to trust God to grow our family first through adoption. When we walked through fertility treatments and the miscarriage, the Lord was faithful in that He gave me eyes to see a picture of the love of a parent as it should reflect His love for us – to see God’s love and feeling of loss in the sacrifice of His son for me and for you in such a new and overwhelming way. It was that loss that would ultimately help give me a mother’s eyes for our son’s birthmother-a tiny glimpse of the weight of her loss. What seemed like a painfully long journey then, God so graciously used in His perfect timing to bring us our first born son, Zachary. 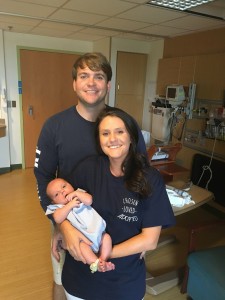 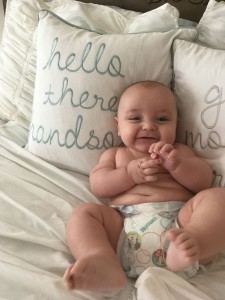 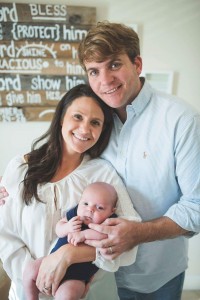 We reached out to multiple agencies in the summer of 2015, all of which did not feel like a good fit for our family. A mutual friend of Leah’s from our church had talked about using a consultant, so I reached out to Leah in October. We began the home study process in November, and received our home study approval in the mail on January 16, 2016. We started presenting our profile book to multiple agencies on January 31st. I posted this on February 3rd, the day we received our first no:

Today I feel like God has given me new eyes to see a tiny glimpse of the rejection Jesus experienced on the cross – all for us – and I am so thankful for God’s sovereignty and grace to let these glimpses encourage me instead of drown me with doubt. So although parts of today felt like a big drop in this roller coaster, the cross has been magnified even bigger and God’s love even greater. I am so thankful for our consultant Leah and the way she makes herself readily available to be used by the Lord. Tonight, she said,sometimes your purpose is to stand in the gap for these women in prayer. How beautiful that we get the unique opportunity to pray for so many women by name. Also, as I think about our firstno?, I am reminded that it is someone else’s yes! Therefore, I cannot help but be full of joy for another family. When you know how rejection and waiting feels, it makes anyone’s acceptance and yes so sweet!

We received an email about an expectant mom, K, making an adoption plan in March, but at the time we were waiting to hear back from another mom so were unable to present to K. However, in April, we were still not matched with a mom, and we received an email saying K was still looking for parents. I immediately knew it was because she was carrying our baby? K received our profile book on April 20, we had a phone call with her on April 26th, and two days later we found out that K had chosen us to parent her sweet baby (gender unknown at this time). We found out a week later that it was a BOY (Long story short, I had dreamed in January before we started presenting to moms that we were matched with a beautiful baby boyThe Lord’s provision is so beautiful!).

We spent time with K, Zac’s birthmom, the weekend of Father’s Day and our time together was perfect. Zachary was born on July 2nd and our lives were forever changed when we got to meet him at 3:30 am on July 3rd. The provision and faithfulness of the Lord were magnified. This was OUR son, and we were given the opportunity to be HIS parents. How beautiful!

Some ask what was the biggest surprise or thing you least expected in your adoption story? I think nothing can prepare you for the day you watch a mom lovingly say good-bye to your son, to whom she gave birth. The weight of that moment, above any circumstances that may have led to her decision, the love and sacrifice she made that day will never go unnoticed or forgotten!

Today Brett and Shea will finalize Zac’s adoption and he will be declared by a judge forever their son. December used to be the month that signified the loss of their little ones, but today the month of December has been redeemed and holds a whole new significance for their family!

You can read more of Zac’s birth story, their month long stay in the NICU, and follow their updates at http://walkingwiththewatsons.blogspot.com/

If you are considering adoption, I would love to chat with you more about working with CAC! Email me at Leah@christianadoptionconsultants.com for more information!

Office Hours: Monday-Friday 9-6 EST
This evening we are sharing another staff introduc

Did you know that Christian Adoption Consultants i

Whether or not we are aware of it, we all have exp

Guarding your heart in the adoption process is som

What a special moment! This is what Adoption Consu

This afternoon we are sharing another staff introd

We have a beautiful adoption story on the blog for

Why the focus this week on positive adoption langu