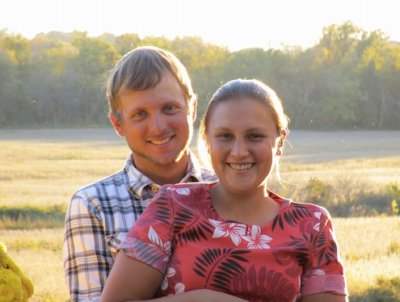 That’s what the headline read recently in Cameron and Jenny’s hometown paper. Their story started like this:?
?
Cameron and Jenny describe the last two years as a rollercoaster ride, but the emotional ups and down paid off in the adoption of a pretty newborn with big blue eyes named Alli Jo, who came into this world on July 5, 2016.
?
But of course there’s more to the story; more than can be captured in a short newspaper article or even this blog. More that God was working behind the scenes for the years and months and days leading up to the day Alli was placed in their arms for the first time.
?
I first met Cameron and Jenny on a chilly November morning at Panera. We sat across from each other in a booth and I listened as they told me their story of wanting a family. They were ready to add a little one and had already been through a lot in their attempts to add to their family.
?
Theirs had been a long road. Waiting at a local agency with little movement before working with Christian Adoption Consultants. Then seeing many possible situations to pray over; presenting and hearing “not yet” from God.
?
Until June 21st when everything changed. They heard about an expectant mom and the precious baby she was expecting. But they felt no clear direction this time. Weary from the journey, they emailed back that they just didn’t feel it was a “yes.” But even the next day, both Cameron and Jenny couldn’t stop thinking about this mama and her baby. When the agency called to check in to see if they wanted to present and said she had never received their email the night before, Cameron and Jenny took it as a sign that this might be God’s answer. They decided to present their profile.
?
But days passed unexpectedly with no movement forward. The plan had been to present that day but almost a week went by until it worked out to show their profile to this expectant mom. Admittedly their faith was getting weak: had they really heard from the Lord?
?
Eight days after putting their “yes” on the table, they heard God’s resounding “yes” back. “SHE CHOSE YOU!” One phone called changed everything. Jenny remembers, “I was SO SHOCKED! I could have laughed and cried at the same time! And then came the second surprise that the baby was to be born on Tuesday! WOW! What emotions! It was so much fun to be finally be able to call our family and tell them the awesome news! We decided since it was all happening so fast that we wanted to keep it a secret until she was born. I’m not sure how I ever kept from spilling the beans.”
It was just three days later when they met their daughter: born at 12:39pm. Life hasn’t been the same since. Their home is filled with sleepless nights, little coos and giggles, and loads of laundry with tiny pink clothes.
Their nursery and hearts are full. And both Cameron and Jenny would tell you their roller coaster was worth every up and down.