Natalie and Loren are currently pursuing adoption as a way to grow their family. I have loved not just working with Natalie, but getting to know her amazing heart for Jesus and for others. Today, I’m sharing her thoughts on adoption and pregnancy, some of the common myths around these means to parenting, and some of my other adoptive mamas weigh in with their thoughts as well.
? 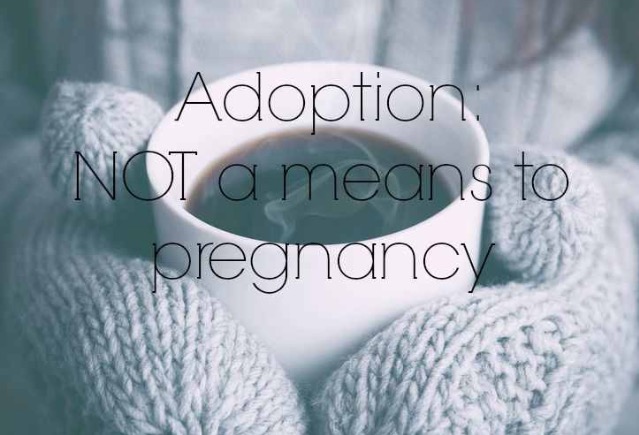 Adoption is not a means to pregnancy.
?
It just isn’t.
?
There is no formula to pregnancy except of course: sperm + egg. But not just sperm + egg, there are a lot of factors that have to take place. For some, this happens the first time they have sex and to be frank, that blows my mind. For others, it happens after two or three months of trying. For still others, it takes more than six months to a year or more, and in that trying time, they are placed in the category of infertility. Even if they do end up conceiving and successfully carrying a precious and so wanted life, they still endured that painful time of infertility.
?
While Loren and I were in the thick of desiring our family to grow and it just not happening, we were praying about pursuing adoption sooner rather than later but were also confident we would still conceive and successfully carry a baby eventually, we had people who love us share stories about adoption and pregnancy following. The stories are always frame-worked as though the adoption had something to do with the wife suddenly being able to become pregnant. It almost always sounded like this, I have these friends who couldn’t get pregnant so they adopted, and then they got pregnant. Have you guys thought about trying to adopt??
?
Maybe you don’t consciously believe that you and others and even my past self were sharing formulas to fix a medical diagnosis of infertility; it is possible that you have never said,adoption is the way to get pregnant. But let’s talk about it, let’s look at the stories I have been told and heard. Let’s be honest and open and willing to address the core heart of this, shining light on it a little bit at a time.
?
Below are some issues that are often stated as the reason people conceive and carry after being told they cannot. My heart is not to make anyone feel guilty for saying and thinking these things, but to educate and reveal to others the perspective of someone who is being told these very phrases and doesn’t always have the grace and patience to constantly educate in the moment. But, I will continue to pray for grace and patience and understanding, continue to ask Jesus to give me eyes that sees their intentions, and also continue to ask for strength to explain how these phrases and assumptions hurt.
?
When you are facing infertility and decide to pursue adoption, you are nearly guaranteed to hear some variation of,you will get pregnant after or while you adopt. We as friends don’t mean it maliciously but intend it as hope in some way. Regardless of the intentions, the comments fester and wound more than I knew they could.
?
??many people like to come up with explanations for how/why couples get pregnant after failing to conceive for many years. This is a natural reaction, and it is understandable how anyone can get caught up in the happiness of the moment to propose what seem to be good reasons for such extraordinary occurrences. -Jennifer in Laughing At God
?

Pregnancy after adoption: because you relaxed
Clearly, the saying goes, because people adopted they relaxed and were able to conceive. Did you know that adoption is not relaxing or stress free? Just because we and others have decided to pursue adoption, doesn’t mean we are suddenly stress free; it also doesn’t mean that every one who adopts has given up hope for biological children. Aside from that, infertility is a diagnosable disease and I have not heard of any other diseases being cured due to relaxing. Sure, relaxing is great, but I have a feeling it won’t cure my endometriosis, blood clotting disorder, or reverse the obscene amounts of radiation that fried my ovaries. What do you think?
?
Pregnancy after adoption: a reward
Sometimes there is a [not always so] subtle implication that pregnancy after adoption is some sort of reward. What? I don’t even. I have a really hard time with the pregnancy announcements that say, We prayed, He answered. Call me fickle, its really okay. But I have been praying for years, along with my husband and many many other people. Crying on my face, tears soaking other people’s shoulders and carpet fibers. Begging and praying for both babies and a submissive heart. It has been this ongoing tension of clamping my hands tight around my desires and wishes, and surrendering them hands open. So to hear those stories about people who conceived and carried after adoption, and to hear the words that it was a reward?that implies once again, that pregnancy is superior to adoption. What does that say to children who were adopted? That they were second best? That their siblings are a reward for them?
?
Children of their own [biological]
I have heard this phrase more times that I could count,So-And-So adopted and then they had children of their own. Children of their own? What will our adopted children be if they are not ours? I know this is not a formula, but it is one of the phrases I have heard more than once and I would love to shine a little light on it.
?
The formula: adoption = pregnancy
There is often an implication that adopting a baby or child is a means to get pregnant. In other words, our ultimate goal must be pregnancy, therefore we must adopt to get there. This formula shouts and screams that pregnancy is the ultimate goal, rather than choosing adoption and loving outside of their bloodline and growing their family in two incredibly beautiful yet different ways.
?
Adoption is one way Loren and I decided early on we would grow our family. This isn’t the case for all people who adopt, and even if it were, there is no guarantee that families will conceive. A difficult thing to articulate is that adoption doesn’t have to be a second option. It shouldn’t even be seen that way. Yes, some people are led to adoption after years and years and years of failed infertility treatments. But that doesn’t mean they love their children any less. I have heard it said that it becomes their second First Option; I am still working this phrase out and don’t know where I land on it, but there it is.
?
?My biggest issue with the pregnancy-after-adoption theory/fable is not the intention of anyone who makes these statements, but I think should be clarified nonetheless to demonstrate the purpose of adoption. Adoption is a means to an end of adding a child to your family; it is not a means to an end of getting pregnant. Both adopting a child and having a biological child are beautiful, Scripturally significant ways of building a family, and one way is not better than the other. -Jennifer, from Laughing At God 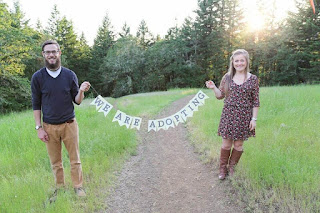 You can find more of Natalie’s story, this original blog post, and their journey to grow their family at Natalie’s blog, Natalie Brenner Writes.